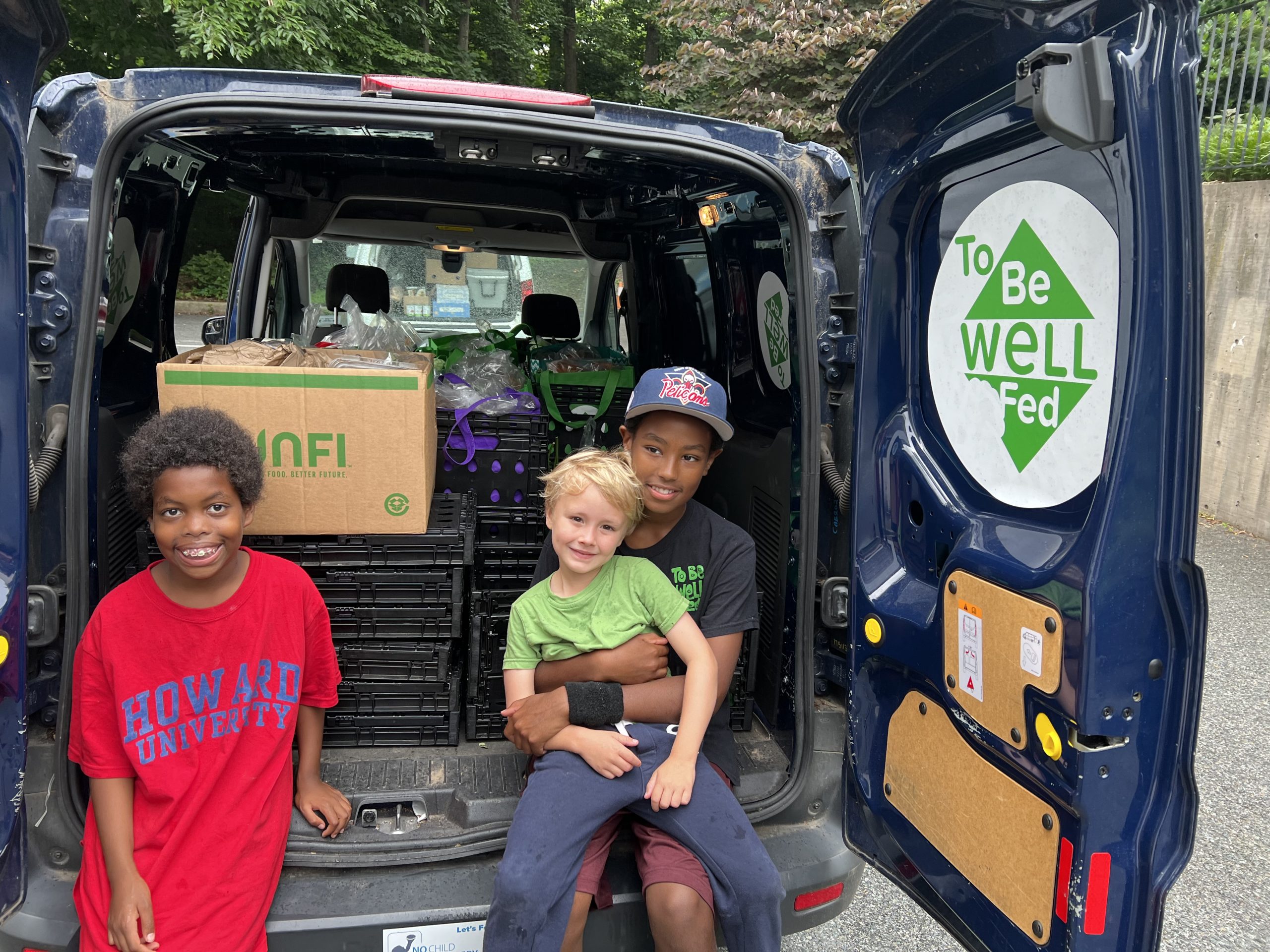 It may have been a sermon from their minister, Rev. Kären Rasmussen, that inspired Dave and Alicia Kiyvyra to begin regularly collecting and donating food to local schools in need, but they both have long carried the mantle of hunger advocacy in their hearts. So, it was natural for Dave and Alicia to involve their three children, Luther, age 13; Abdisa, age 10; and Memphis, age six, in their early efforts.

“We would go grocery shopping together on Thursdays and the kids loved helping us pick out extra food they thought kids would like, counting up the extras, and organizing them in our cart,” said Dave. “As we began regularly dropping off the donations at one of our local schools, each boy took turns going with me.”

What started as routine generosity quickly formalized into a powerful and impactful non-profit when Dave and Alicia created To Be Well Fed, a family-run organization dedicated to fighting childhood hunger in Washington, D.C., where one in seven children face hunger daily. Today they partner with public schools to provide groceries for more than 150 children and families in need. The minister who inspired their efforts, Rev. Kären, a titan in the childhood hunger advocacy space in her own right, has provided ongoing support and mentorship to the Kiyvyra’s as they have grown as local leaders in the battle against hunger—and they’re doing it all as a family.

Raising the Next Generation of Hunger-Focused Humanitarians

Dave says that he and Alicia explained to their kids early on why they were purchasing and donating food to kids in need.

“I want our kids to grow up understanding what it means to help others in need,” said Dave. “I grew up doing volunteer work, and today I work in education and literacy. It’s hard for kids to focus on reading when they’re hungry.”

Thirteen-year-old Luther speaks with wisdom more profound than his age would portend. “I realize that I don’t know what it feels like to be hungry,”  he says. “Only the people who experience it can understand it, but I imagine there is a lot of uncertainty. Eventually, you might get used to it, but it also might be surprising to open your fridge and not find anything there.”

For Alicia, her family normalized the concept of hunger relief volunteerism when she was young—a goal she has for her own family.

“I grew up in Arkansas,” said Alicia. “Everyone in Ft. Smith knew my grandfather. He had a red Ford truck and would drive around picking up expired food from local grocery stores to deliver to those who needed it. I’d visit him, we’d have donuts, and he’d drive around and do his food delivery. It was the most normal thing for me. I ended up going into the Peace Corps. That’s where I decided how I wanted to live my life and raise my family. The Peace Corps was my favorite job for a long time, but now this is my favorite job. I want my kids to grow up understanding what it’s like to be part of a community and feel responsible not just for themselves but for others in that community.”

Growing Up with Empathy and Benevolence

Luther has developed the maturity to not only understand the importance of volunteer work for supporting fellow community members but also for personal development.

“I think volunteering is a great way for kids to learn how to be independent and make things happen,” said Luther. “If you’re always getting your handheld, you’re not learning. You have to do the work yourself. I can tie my brother’s shoes, but it’s better if I teach him to tie them himself.”

Nine-year-old Abdisa is also keenly aware of one of the core benefits of community service.

“It makes me feel good,” Abdisa says with a shy smile.

Even Memphis, the youngest at six years old, has found a passion for the practical side of volunteer work. Alicia explains how Memphis loves sorting food donations at their church and recalls how one day he told her he would rather sort food at church than go to school because he feels like it’s how he can be most helpful.

Looking to the Future

The challenge of childhood hunger is massive. For Dave and Alicia, contributing to change and making a difference in their community means understanding how to scale their operations for maximum impact.

“For now, we are committed to increasing our regular food donation efforts from supporting three schools to four,” said Dave. “We’re going to flood those four with as many resources as we can and maybe use what we’ve learned to encourage a replication of the To Be Well Fed model by other folks.”

Dave adds that the importance of educating others and helping them understand that anyone can make a difference in the battle against childhood hunger, one child, one meal at a time, is a lesson they learned from Rev. Kären and her non-profit organization, No Child Goes Hungry.

“Rev. Kären always says you don’t have to be part of a large organization to feed kids. Just pick up some extra food at the grocery store, drop it off at your local school, and they will get it to  kids in need.”

By all indications, Dave and Alicia have succeeded in normalizing the concept of community service for their children. Each of the Kiyvyra children has found a passion for philanthropy that they will carry with them throughout their lifetimes.

“When I grow up and make my own money, I’ll donate to To Be Well Fed or give back to another small organization working toward a similar goal because I know what it’s like,” said Luther. “I really like volunteering. It makes me feel good but knowing that something I did has helped complete a journey for someone else is more special.”

For Dave and Alicia, it’s not seeing their children share their passion for doing good that is most fulfilling but seeing their boys carve individual marks in the world and grow from the experience.

“This work makes Alicia and me happier as people because we feel connected to the community,” said Dave, adding, “It makes us feel we’re part of something bigger, and I think it gives our kids the same feeling. It embeds it in them, and it will help make them more whole people.”

Alicia adds, “It’s nice for them to be connected to more people and communities. They all make friends easily everywhere they go, but through giving back, they feel like D.C. is their home, not just because they live here, but because they are actively participating in the community.”

Advice for Turning Inspiration into Perspiration

For parents inspired by the Kiyvyra Family’s story, Dave and Alicia’s advice is to make volunteering a family affair.

“You have to do it too,” said Alicia. “You can’t just tell your kids to get their community service hours. You have to show them how. When you lead the way, your kids will see how meaningful life can be when service is part of it.”

Luther has advice for his peers as well. “If volunteering is something you want to do, you have to cut out time, even if it’s half an hour. You can’t go into it with a bad mindset. While volunteering, you can’t think you’re missing out on something. You need to focus on the fact that you’re helping out with something. And I’d emphasize the feeling you get in the end. Sometimes in the mornings, I don’t want to get out of bed for the food deliveries, but after we get into the delivery van, I feel really good—even on a cold morning—knowing I’m helping to make a difference to someone in need.”

Learn more about To Be Well Fed, and No Child Goes Hungry.

No Child Goes Hungry (NCGH) is a registered 501(c)3 non-profit dedicated to the elimination of childhood hunger, one kid, one meal at a time.

Subscribe to our newsletter. We respect your inbox and your privacy, so you can unsubscribe at any time.